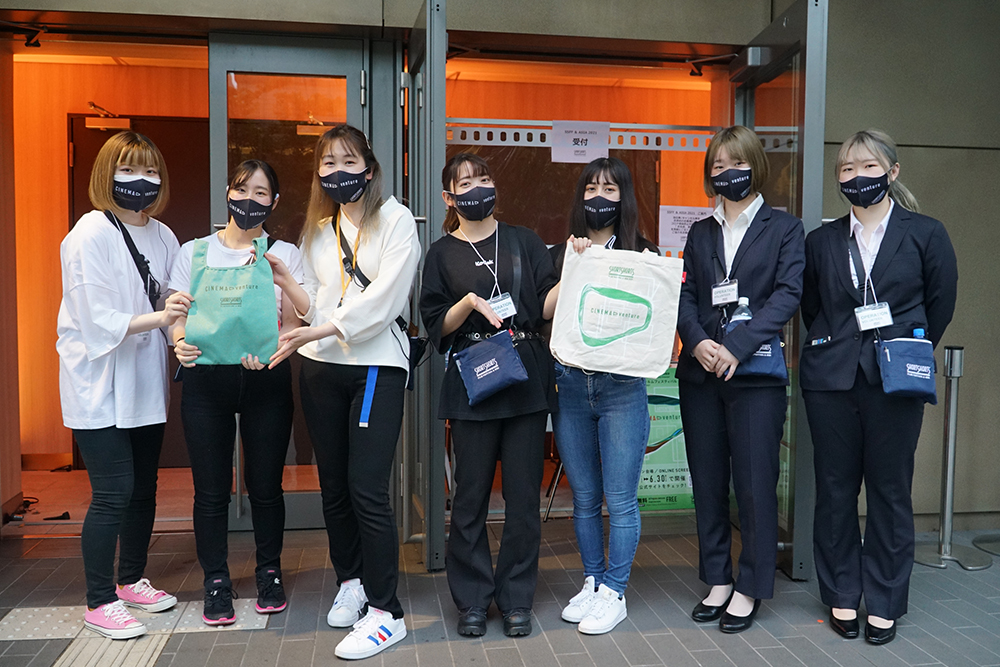 with Orion Eshel and Luther Clayton, directors of “Man of the Harvest.”

(The synopsis of the film: Two young boys with a brotherly bond are discovering the beauty hidden in their world; in nature, music and language. But soon must battle to retain it when it is threatened by one uncontrollable act of violence.)

Orion was in Costa Rica and Luther was in UK. We thanked them first for getting up so early or staying up so late! We asked them about how their collaboration started. Eshel said that they met though online, when Eshel wanted someone to check his English script for corrections. When he found Luther, he corrected its English with a few pages of additional ideas. “That’s how our collaboration started, “ said Luther. Eshel wanted to tell the story based on the shooting incident that took place in 2016, and he said it is something that his generation don’t talk much, so Eshel felt the need to remind the importance of the school shooting topic. They also found two marvelous actors through online audition. They found the actor and through him, his actor friend was introduced, and that’s how the two real friends were cast in the film.

The MC ended the Q &A by asking the two directors about their current project. Eshel said he is currently preparing a feature film script based on his life story in Costa Rica. Luther is currently working on a music recording project, but he hopes to collaborate with Eshel again for a film project in the future.

At the Q&A after the screening we had the chance to meet filmmakers of “Kichijoji Go Go”. They were Raita Yabushita (Director), Haruka Sasaki(Cast), Julian Koike (Cast). The story is about two young girls who travel back in time from 1970 and arrive in modern-day Inokashira Park where they encounter an old man. The film ends with a surprising secret. 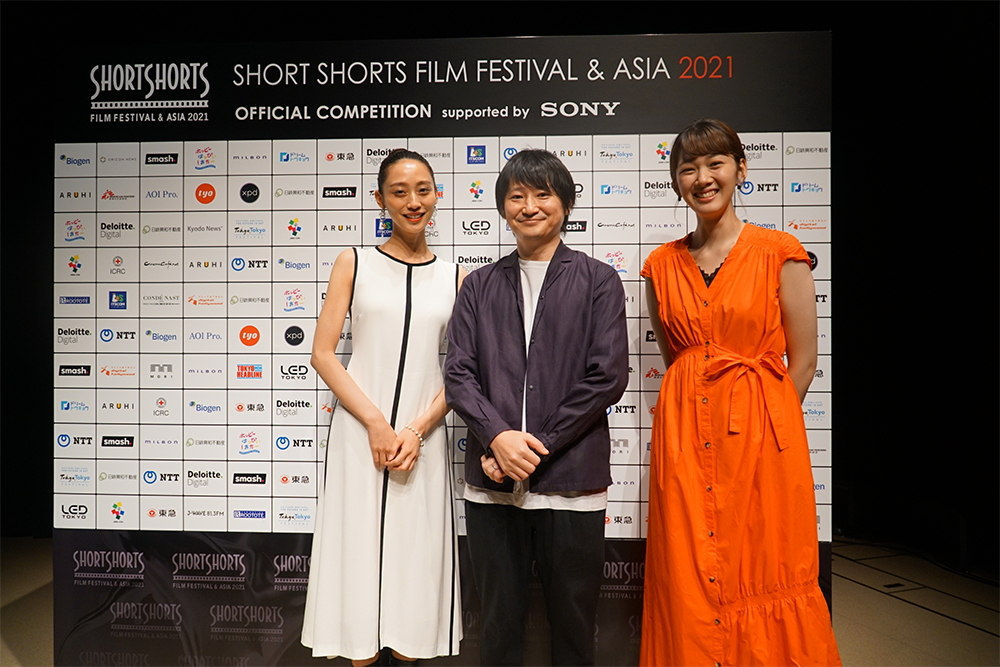 Director Yabushita of “Kichijoji Go Go” commented, “The Kichijoji Photo Studio Committee, which archives old photographs, asked me to make a short film based on an old photo. So, Yabushita wrote the original script. When asked about his impressions of reading the script for the first time, the cast member, Haruka Sasaki, said, “I had no idea of what the Showa era was, so I thought I had to study the customs of Showa era. Julian Koike said,” From the director, I received a script and a DVD, and he asked me to see the movies made in Showa era and feel the world, and when I actually saw them, I realized that people talked fast. I had to study about shadowing, retro costumes, and the look of makeup of the era. ”

Regarding Showa-style costumes, Haruka Sasaki commented, “I was embarrassed at the time of the shooting at Inokashira Park. It was quite noticeable.” Julian Koike also smiled with a bitter smile, saying, “Yes, you said (in the dialogue) that you were also (Atai), an old way of saying “I”.”

Director Yasushita commented, “Since I can only express the feel of the film with the retro costumes and play-like setting, I brought the glue like a comedy movie from the Showa era as it is. Since the park is now, I tried to give it a retro, grainy feel to the music.” He also said, “I thought (production) was simple and stage-like. It was a one-shot shoot because there weren’t many days in the gap between the coronas.”

Mr. Sasaki laughed when he said, “I was the only one who was bitten by a mosquito. There were 20 places where I had light blue high socks. In that sense, it was difficult.” Director Hishita commented, “Because extra people and people in the city are wearing masks, I think this work itself will be an archive (cutting out one era).”

At the Q&A after the screening we had the chance to meet Nao Sone of “Trumpet”. The film is about a Japanese trumpet player on a cultural pilgrimage to discover New York City jazz experiences a hell of a night after being lost in Brooklyn. Mao Sone played the “fish-out-of-water” lead character in the film. 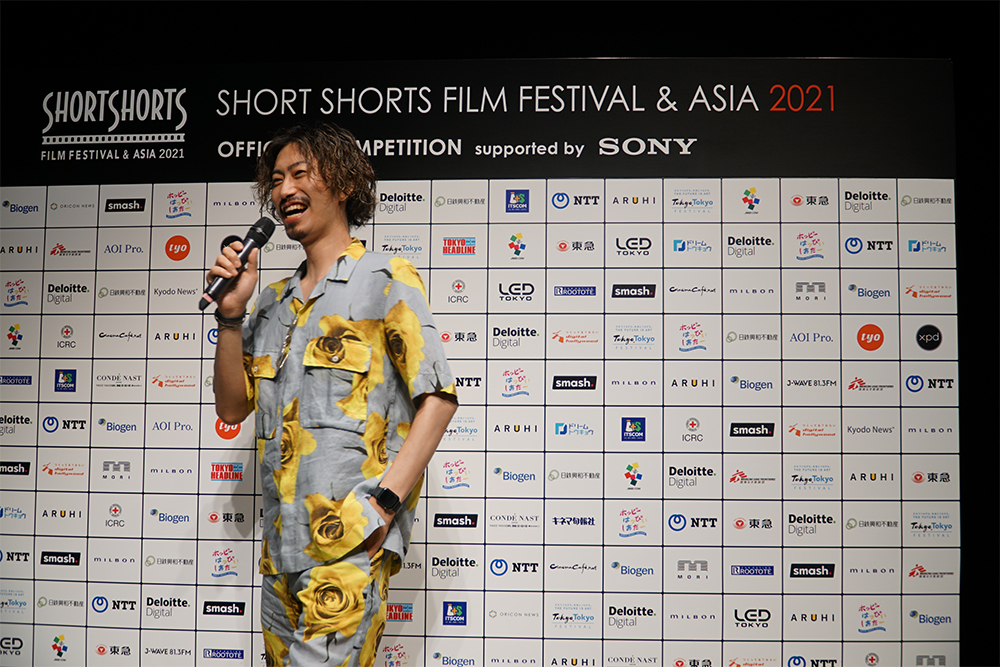 We asked him how the film production was in NY. Mao introduced himself by saying “Actually I can speak English.” and we heard laughter and applause from the audience. He added, “I am a trumpet player and composer, but this time, it was my first challenge as an actor.” When Mao was asked about his impression of a film production, he said “It was more sober work than I’ve imagined. For example, during the shoot, I walked about 50 meters of distance 10 times for a a scene of a few seconds. But like in music composition, the director choses the best shot (element) and pile up to make a piece.”

When Mao was asked about when the production took place, he said, “The film was shot in May 2019, after which the Swiss director worked in a French studio in France, and in January 2020, the post-production including recording was done. “ He added, “The shooting was in Brooklyn. It was difficult to show Brooklyn with emptiness. The shooting was in May, and there was little time in total darkness, so it took more days to shoot. It took 7 days actually, plus 3 days of sub-shots, so it took about 10 days in total. ” When he was asked about the final scene of the film, he said, “It was the director Kevin’s idea to put improvisation in the last scene for about a minute. And at my suggestion, I decided to do the impromptu in one or two takes. While the cameraman was shooting the morning sunrise image, I was closing my eyes and did the improvisation. I think we were able to express the scene well with the audience in front of me.”

Mao Sone will continue to be active mainly in Tokyo, so please check his YouTube channel and official website for any concert announcements.

At the Q&A after the screening we had the chance to meet filmmakers of “the Day”. They were Shin Namura (Director), Kana Satouchi (Producer, Writer, Cast) and Nanami Hidaka (Cast) 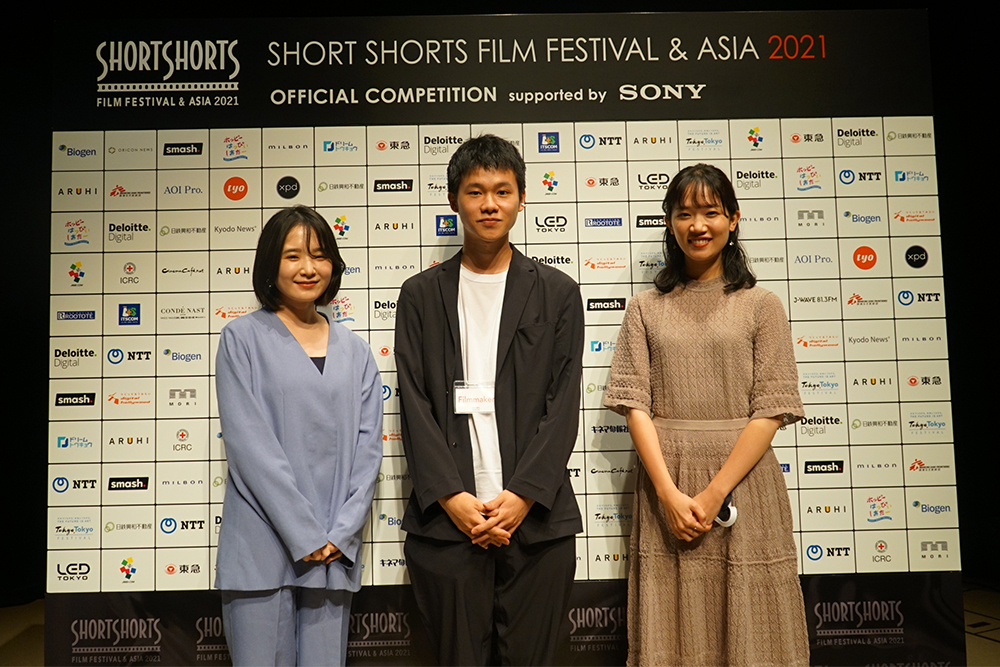 The film is about Kyoka holds a gathering for her relatives on the third anniversary of her mother’s death. When Kyoka reprimands her younger sister Yuri for her sulky attitude throughout the event, it sparks a heated argument between two sisters who don’t understand each other.

Director Namura talked about how he came to direct this film. “I am an actor, and when I was attending the same workshop as Kana last October, I said to her, ‘I feel like directing a movie.” And then she said, “Well, why not you make one?” So, I decided to make a movie. ” Kana Satouchi, the producer, writer, and actress (who played the older sister) said, “I talked about the initial concept of the film with Director Namura, but I wrote the script. I am an only child and have no sisters, so the quarrel scene (script) was created out of my fantasy. The important thing was to create a family of quarrels that would be a positive thing for the family at the end. ” Nanami Hidaka, who played the younger sister said, “I had experienced a real quarrels because I have a younger sister, not an older sister. In real life, I don’t apologize to her even until the end.” Director Namura said, “I myself have been thrown a remote control by my (usually quiet) sister, so I wanted to express and shoot a scene where people who are often calm can get very emotional in quarrels with their brothers and sisters.

Regarding the casting, Kana said, ” I had co-starred with Nanami a couple of times in the past, so I thought I could trust Nanami in the character. We never had a quarrel scene together, so I thought it would be a challenge for both of us.”

Nanami said, “I just felt like following every direction of Director Namura, as it was his first directing experience.” When asked about his impression of the first time directing, Namura said “The shooting was only for two days. The banquet scene and the living room quarrel scene for one day each. I was more nervous of the responsibility of completing the shooting in two days in front of all the cast and crew members in this short limited time.”

We also had guests from the film “Digital Tattoo” They were Ik-Tong Ryo (Director) and Natsuyo Mikawa (Producer).

The film is about a young girl whot receives a job offer from a prestigious company, but is in danger of losing it due to something her father posted on social media years ago. 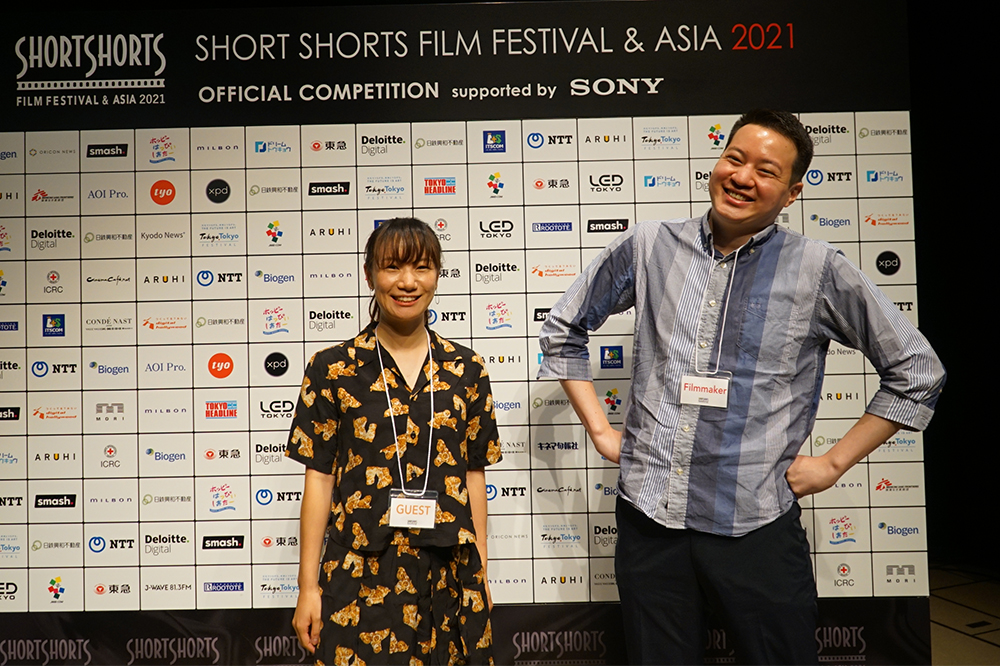 When asked about how the project was initiated, Director Ryo said, “Natsuyo (producer of the film) was a colleague of mine. We used to work for the same digital advertising agency. She is an SNS consultant and one day, she mentioned that she wants to make a movie. So, I made this film with the theme of digital world, which is her speciality. ”

Natsuyo said, “In the film, a person’s past posts affect the future of someone. Also n the next 50 or 100 years, the values ​​of (people’s) the past thoughts and feelings change. For example, some past and old remarks of an elected politician can become a problem. (This is happening.)

Natsuyo continued by saying “This can happen to me. I felt this even at work. In the future, casual posts may not be casual. So now I can’t even notice a casual comment that may become dangerous. In this movie, the protagonist wonders if she should delete her father’s post account. When the past is bashed, can she deny his past? ”

Director Ryu said, “The smartphone is wearable, assuming 30 years from now. The shooting took three days, and 1 day as a spare. (Post-production such as CG) took over a year and 5 months.” When asked about the final scene, Ryu said, “Yes, the sound of the rocket suggests that the protagonist left for Mars. Her final decision was to go to Mars, so we also assume that her father’s account was erased.”

Finally, when asked what kind of movie Natsuyo would produce for her next project, she commented, “Next, I want to make a story about humans and robots.”

So, the last day of the event at TSCOM HALL in FUTAKOTAMAGWA RISE will continue until 6/20! Please continue to enjoy short films together with Q&A with the guest filmmakers!