To kick things off for our 24th edition of the Short Shorts Film festival & Asia 2022, we held a week-long screening at Yomiuriland, a popular amusement park in the outskirts of Tokyo as part of their “Okinawa Week.” The park has been operating since 1964 & was the original home of the Tokyo Yomiuri Giants training grounds. Today, Children’s Day & the last day of “Golden Week combined,” along with the easing of Covid-19 restrictions, saw pre-Corona crowds at this massive amusement park.

Festival president, Tetsuya Bessho hosted the talk show & screening & began by giving a rundown of this year’s festival. He then showed a short trailer of what to expect this year.

He then called out our first special guest, popular comedian, actor & director, Toshiyuki Teruya (Gori). Gori has participated in our festival numerous times over the years with his short films including his award-winning, 2021 short film, “A Woman Who Acts.” 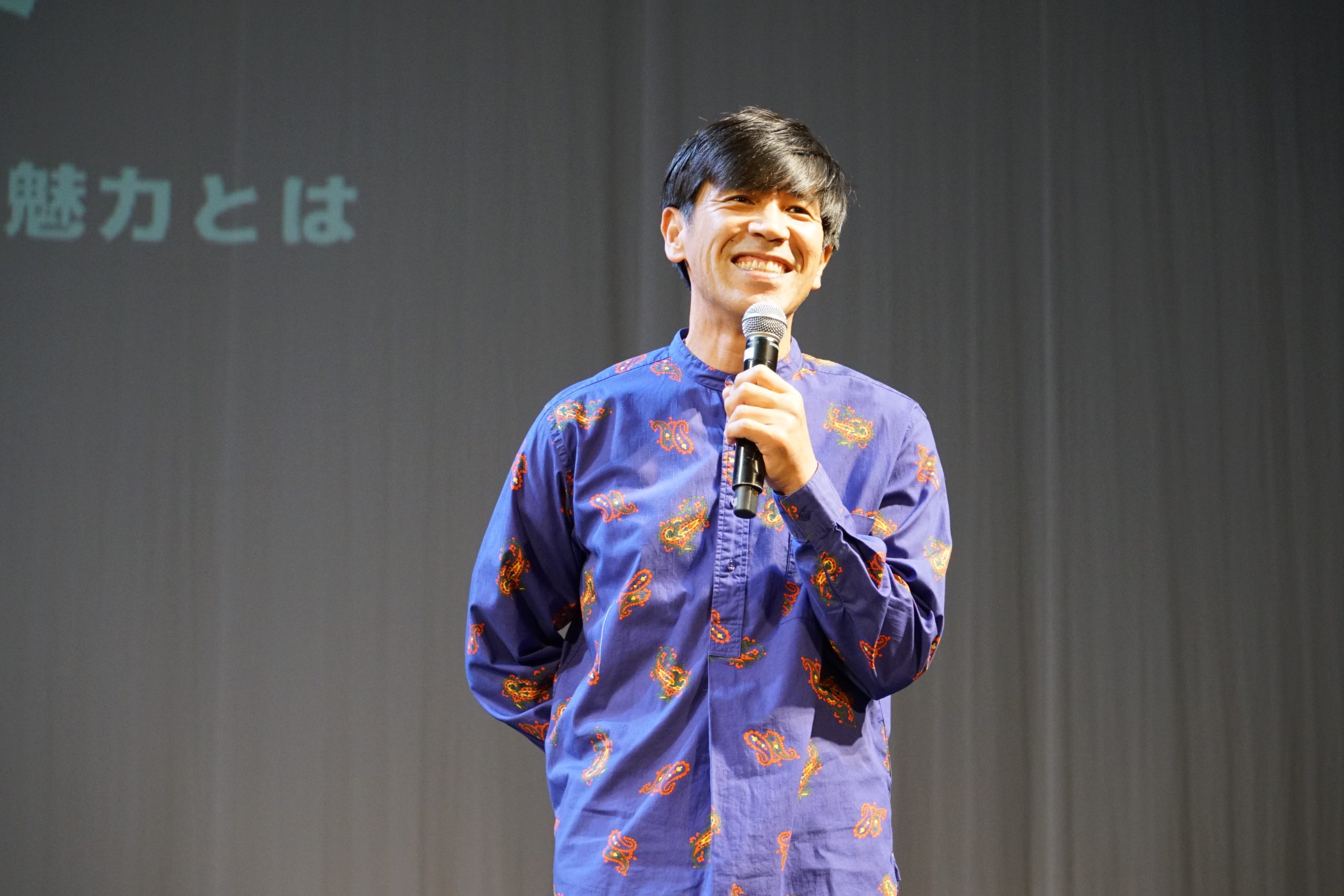 Gori, who was born in Okinawa was the perfect guest to close a week of screenings of the short films set in Okinawa that was produced by the festival in collaboration with the Japan Cultural Expo to introduce & highlight the wonderful culture & customs of Japan & in this case, Okinawa.

Gori told us about his days growing up in Okinawa & playing in the abundant nature of the islands like scooping up netfuls of guppies from the pristine rivers. Gori, who is about to turn 50, told the audience about how the current, internet world has really taken the drama out of growing up. He recalled having to “telephone” the home of a girl he liked in school & being scared to death at the thought of going through her father who answered the phone. There was so much drama in the pre-internet/smart phone days! 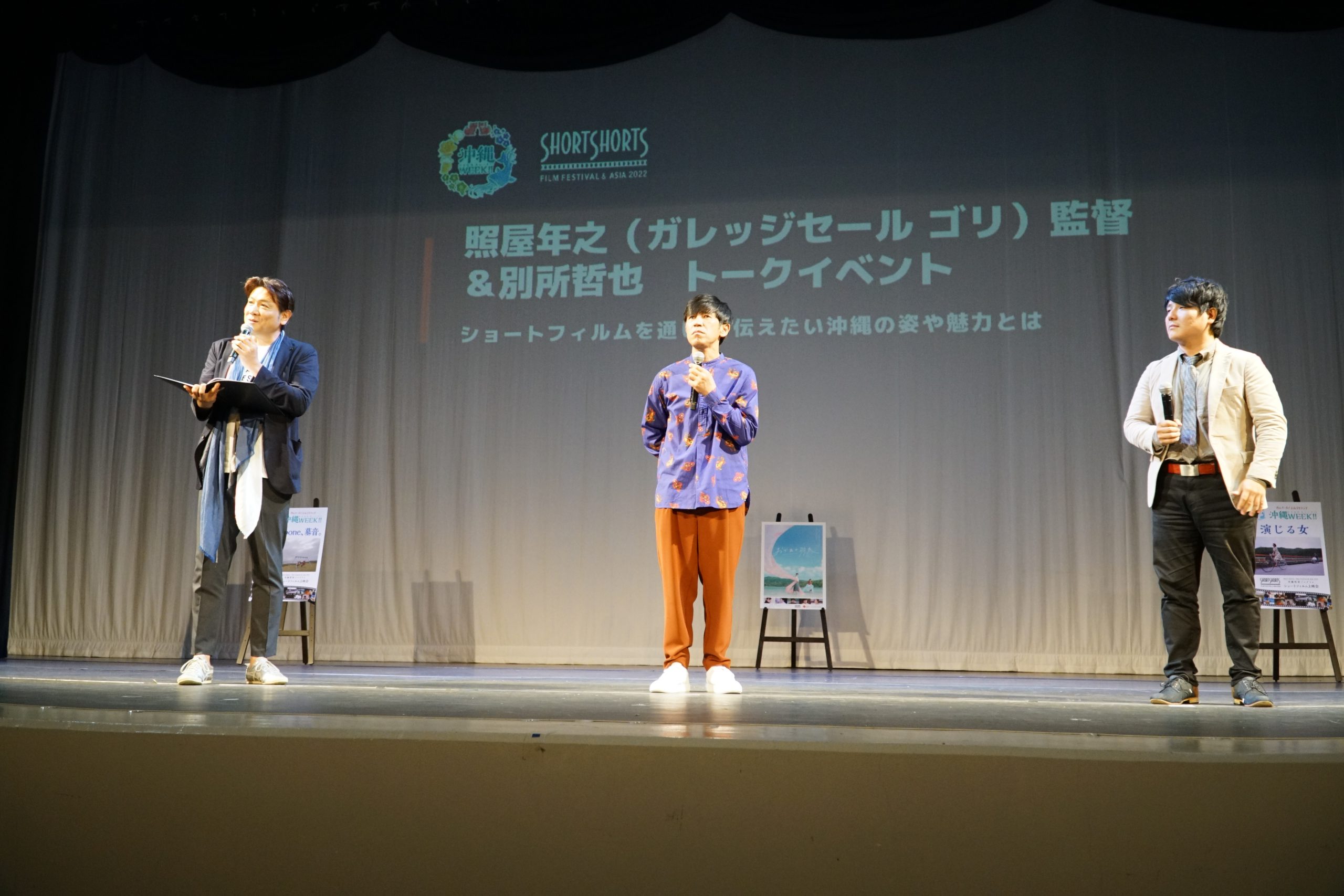 After the screening, Bessho then called out Gori once again to the stage along with director Kazuhiro Taira. Taira wrote the screenplay based on a short story by Kumiko Takahashi, a writer & former drummer for J-rock band, Chatmonchy. The story is based on a Noh play that dates back as far as the 8th century. Director Taira said that he wanted to “update” the story & set it in Okinawa. The audience was astonished when Taira told them that the broken arm that Gori suffered in the film when he appears with a cast was for real. Gori had broken his arm just days before the shoot was to start in Okinawa. The fast-thinking director just told Gori that he would use it as part of the story in the film!

The shoot took 3-4 days (normal for short films) & the people of the small community helped create the friendly & open atmosphere just by being themselves. Taira explained that Okinawa becomes even more beautiful as you become more familiar & get to know the culture, food & customs of this island paradise.

Bessho asked for a final message of advice to young filmmakers.

Taira told the audience that in this age of smart phones & portable, high quality equipment, you should just go out & start shooting. Something, anything. The more you shoot, the more creative you’ll become.

Gori reflected back to his stories of growing up in Okinawa & the dramas that everyone goes through in their lives. The important thing is to share that story. There’s always someone who will relate to the story or know exactly what your trying to depict. 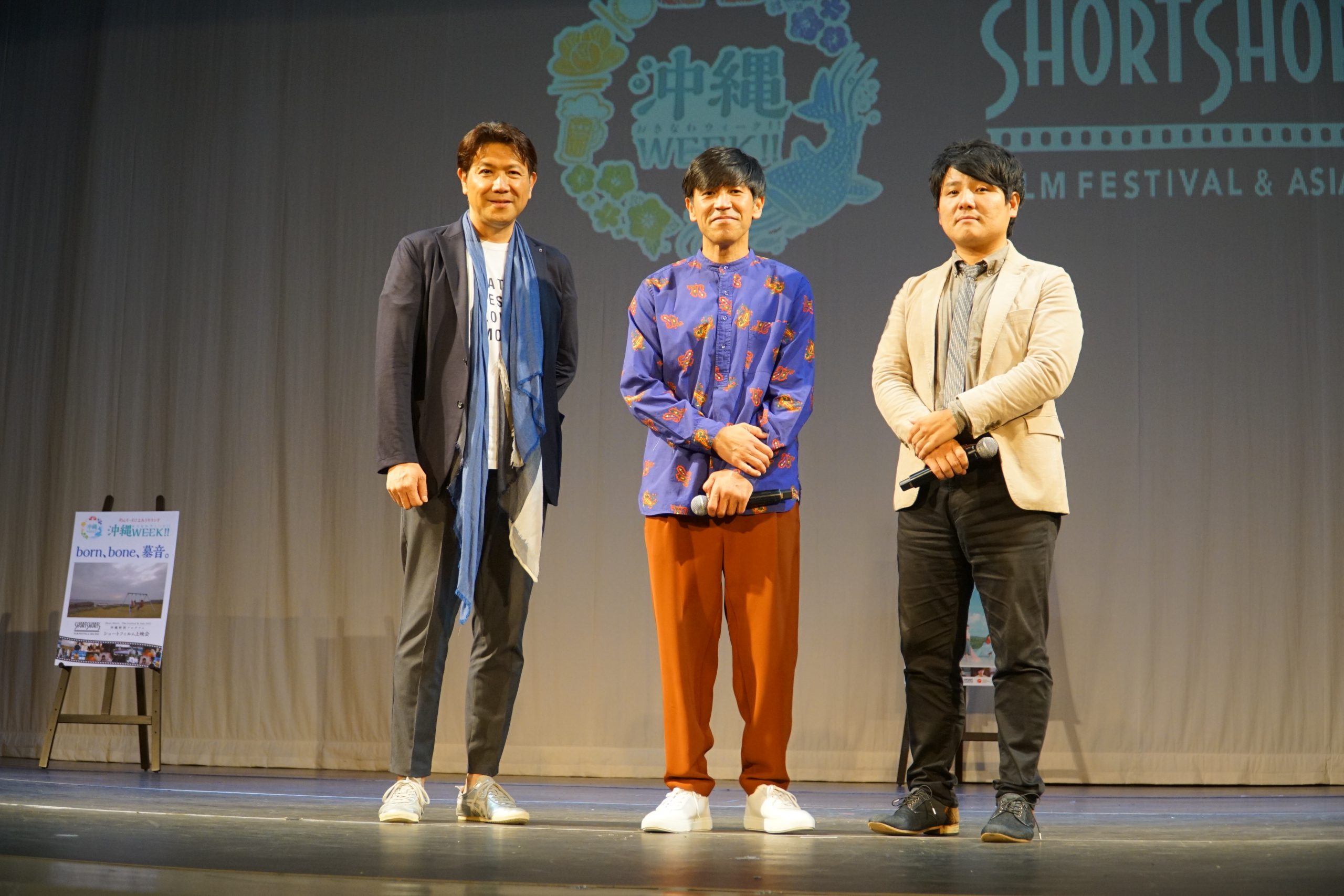 A good, enthusiastic crowd of over 400 people. A mix of young & old, families & couples & of course, short film fans then headed out to enjoy the attractions of Yomiuriland.

The world premiered short film “Mom’s Celestial Robe of Feathers” will be on YouTube on May 15, the day of 50th anniversary of  Okinawa’s return from U.S. rule.